On a regular basis Sunnie J. Groeneveld provides us exciting interviews with ETH Spin-offs. This time she met ETH Pioneer Fellows Clara Beck and Tom Reuter, two of the founders of TapTools. 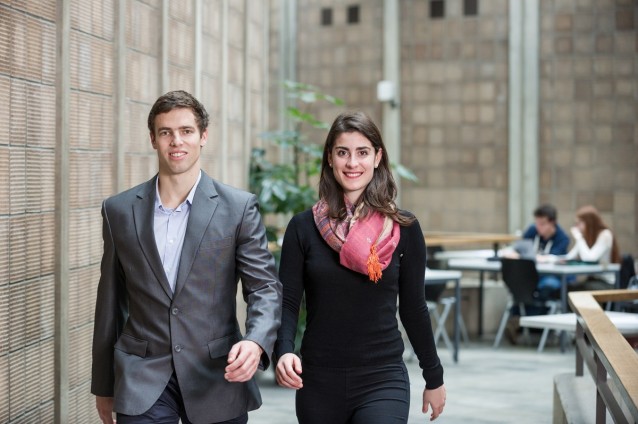 TapTools developed a device for non-destructive testing. Clara Beck and Tom Reuter believe that their product will be the next key technology in quality control testing. The novel technology goes beyond visual inspection and ensures comprehensive material characterization in a hundredth of a second.

Clara and Tom took part in venturelab’ Startup Essentials Workshops at ETH Zurich. These workshops have advanced their presentation skills and their project in general. Right after the workshops TapTools gained 2nd place at the prestigious <<venture<< award ceremony. Clara Beck says: „We took part in many events. The Startup Essentials had some challenging coaching sessions, including impressive people and great dynamic!“

The workshops will start in September again at ETH Zurich and EPF Lausanne. If you want to join, apply here. And now Sunnie, take it away.

SUNNIE: Can you give me three bullet points of information about yourself?
CLARA: I did my master’s in mechanical engineering at ETH, worked in the group of Prof. Daraio as a scientific assistant on TapTools a year ago and I wrote my master thesis at Oxford University.
TOM: I also finished my master’s degree end of 2014 at ETH in mechanical engineering, then took over the project from Clara in June 2014. Clara and I both won the Pioneer Fellowship in December 2014.

SUNNIE: What is TapTools?
CLARA: We developed a device that measures mechanical properties of any material. Just like your finger touches a given material and finds out whether it’s hard or soft, we digitized this act of touching and made a machine out of it. We analyze the signal we get from our “finger” (i.e. sensor) and extract much more information from it than a human finger ever could. Also, it’s non-destructive. So just like your finger, we don’t destroy the material when touching it. Many mechanical tests do, so being non-destructive is one of our big USPs.

SUNNIE: What areas of application are you looking at?
CLARA: We see two applications: The first is a hand-held device (like our prototype which is a bit bigger than an iphone). The idea is to use it onsite, for examples on airplanes to check that there are no defects on the wing or on construction sites. The second application could be an in-built version for production lines, because we measure within hundreds of seconds. I.e. we could install our device at the end of a polymer production line to test every area of the product. This helps you detect failures early on, which in turn reduces waste and saves costs.

SUNNIE: Which stage are you at right now?
TOM: We are six engineers working on this and have a very advanced prototype. The big challenge we have for the year ahead of this fellowship is to find a champion market.

SUNNIE: What has been your proudest moment so far with the company?
TOM: We had invited an expert in the polymer industry a few weeks ago. He advises polymer production companies in quality assurance. He brought a sample to our meeting and said: “At room temperature you probably can’t test anything.” Two days before, our prototype had broke and we had been working day and night to fix it. So it was a bit of a gamble, and he anyways already thought we can’t measure anything. But then it worked! Even at room temperature we could give him all the information he needed! We were just standing there and all silently thinking: Oh my God, it’s working!” Within the first 10 minutes of the meeting the expert agreed to continue collaborating with us because he could really see the potential. We were absolutely thrilled; after he had left the meeting, all of us just looked at each other and were super relieved, happy and proud!

Interview with Sandipan Chakraborty by GlobalTechBox.com