From November 28th to December 2nd, 2016, 40 “sciencepreneurs” from Switzerland, Brazil and India spent a whole week in Switzerland as part of the Academia-Industry Training camp (#AITcamp) 2016. The program enables researchers from Swiss, Brazilian and Indian universities to assess the marketability of their innovation, develop their business acumen and network with peers at an international level. The week ended with a pitching day during which the best projects were awarded international AIT Grants in three different currencies totaling USD 100’000, thanks to the support of national Science and Technology departments. Here are the highlights. 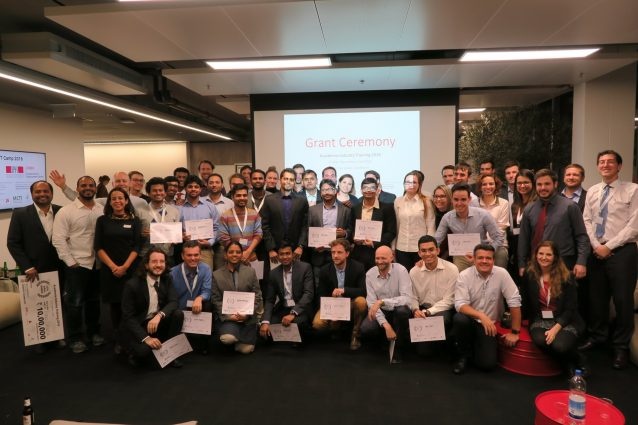 The program started with a kick-off day in Switzerland, with the aim to prepare the participant for the AIT journey. As such, two teams of Swiss participants traveled to India and Brazil in October 2016 for an understanding of both markets, the development of scientific collaborations and entrepreneurial training. During the “Swiss AIT week” from November 28th to December 2nd, 2016, participants from India and Brazil joined the Swiss participants for an intensive program in the Nr.1 innovation country in the world, Switzerland, between Lausanne and Zurich.

On Monday, the AIT Camp started with a round-table presentation, which gave the participants the opportunity to understand the expectations and the requirements to pitch their projects to Swiss and European investors. They visited startups in the afternoon (Abionic, ScanTrust, Rayform and Flyability) as well as the Swiss Biopôle in Lausanne. In the evening, they could take part in an exclusive Networking event at Swisscom Digital Lab at EPFL Innovation Park.

Tuesday, the highlight was the mentoring sessions with experts. This has been a much appreciated moment for the participants, as it provided useful feedback on how to pitch their idea. Then, it was time to leave to Zurich with the “PitchTrain” (yet another occasion to pitch with the feedback received during the day!) before the big Pitchbattle the next day in Zurich.

The #AITcamp participants are going through real #mentoring today! Who will win the #pitchbattle tomorrow? pic.twitter.com/qv1vkLEPmV

AIT Swiss Camp Pitchbattle at #startupspaceZH
Amazing projects were showcased this year at an international level with AIT, in all industries, from Life sciences, Medtech, Agritech, Cleantech to digital business. As such, on the Wednesday night, it was about time for the AIT Swiss Camp Pitchbattle to take place, with 10 Brazilian and 10 Indian participants pitching their startup project against 20 Swiss participants, in front of an esteemed investor jury. The event was a great opportunity for the AIT “sciencepreneurs” to pitch their ideas to a public of ETH Students, investors and entrepreneurs from the Zurich area. They  pitched in one minute with one slide. 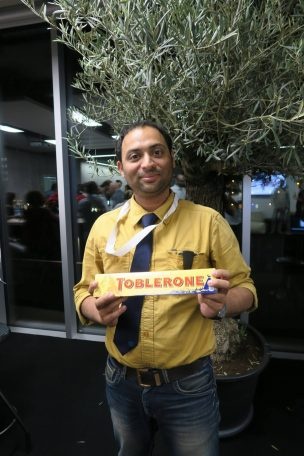 The participant from India Abhishek Cukkemane convinced the jury and the audience and won the Pitchbattle. After his pitch, he explained: “It was first time I pitched in one minute. It was a tough challenge but I’m glad I did it!” Before the camp, Cukkemane was hoping to meet some great collaborators and investors. Luckily, he found both during this week. “I’m very happy about it and can’t wait to come back to Switzerland.”

Check out the pictures of the AIT Swiss Camp Pitchbattle here

AIT Innovation Grants: A support in 3 currencies from 3 national Science and Technology Departments
The Final Pitch and AIT Grant session on Friday December 2nd, 2016, gave to participants the opportunity to pitch their ideas to a jury of experts, with a Q&A session. It was an opportunity to display their improvements during the entire AIT program and concluded the Swiss AIT camp.

The participants pitched during 5-7 minutes with a set of slides. The jury judged on five criteria: Technology & IP, Market Potential, Business Planning & Execution, Entrepreneurial Team, Grant Impact & Use of Funds.

And the winners are…

Check out the pictures of the AIT Grant ceremony here 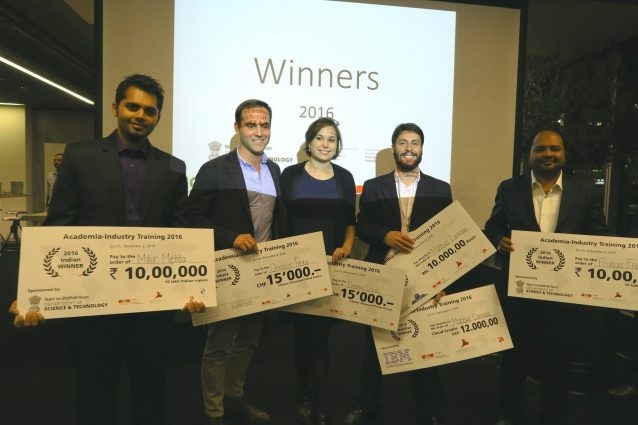 All the winners of the AIT Grant.

After the finals, Dimitrios Terzis was very relieved: “This grant is proof that I’m on the right path. I would like to thank venturelab, swissnex India and swissnex Brazil, who helped to organize this great AIT program in India, Brazil and Switzerland.” Check out the interview with Terzis, in which he talks about his startup MeduSoil.

Pradeep Pillai, Head of Programs of “Society for Innovation & Entrepreneurship” (SINE), from Bombay accompanied the entrepreneurs from India. He was in Switzerland for the first time. “My highlight was the Final Pitch session and AIT Grant ceremony. It was incredible to see how all entrepreneurs developed during this week and understood how to sell their ideas in front of an audience.”

Caroline Graf, venturelab Manager Suisse romande, will not forget the mentoring sessions held at EPFL Innovation Park:  “A lot of the participants told me that they appreciated those sessions with our experts.” She can’t wait for next year’s edition. The camp was described by many participants and partners as “the reference for “sciencepreneurs”: thank you to all the partners and participants for such an amazing edition!

The program is part of the India-Swiss Joint Research Program between Switzerland and India mandated by the State Secretariat for Education, Research and Innovation (SERI) to EPFL CODEV “Leading House”. They are co-organized with venturelab, swissnex India and swissnex Brazil.

The AIT program comprises a full day preparation kick-off event in Switzerland, a week in India, respectively Brazil, and then Switzerland, including workshops, industry visits and business meetings.

You can live the entire “AIT Swiss camp” in 100 more tweets on twitter.com/venturelab_ch

The Swiss team who went to India in October 2016

The Swiss team who went to Brazil in October 2016