The EPFL spin-off Intento is trying to help the most severely disabled stroke patients. The startup celebrated a lot of success in the past and seem to have prospects for the future. We talked with CEO Andrea Maesani about his company, his experiences with development programs and future deals. 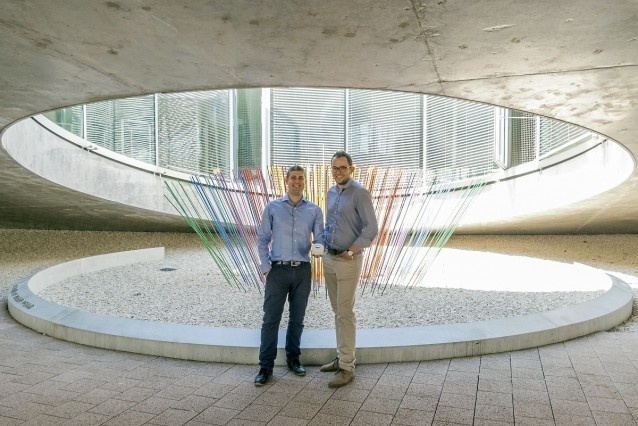 The mission of the EPFL spin-off Intento is to help severely disabled stroke patients to perform complex movements again. Their professional rehabilitation solution convinced the jury of Venture Kick recently, as Intento won the first stage of the seed funding program. Intento has also entered the Startup Acceleration Workshops of venturelab this fall to take their project further on the success path. We met Intento’s co-founders before their pitch at the Swiss Startup Day (CEO day renamed) with 9 other Venture Kick startups and 15 venturelab startups in Bern, on Wednesday 21st of October, to know more about their idea, and plans for the future.

Andrea, tell us your story. What did you study?
I have a background in computer engineering and a PhD in artificial intelligence; Andrea (Biasiucci), the other co-founder of Intento, is an electronic engineer with a PhD in brain-machine interfaces. We met during our doctoral studies here at EPFL.

How did you found your company Intento? Is there a funny story behind it?
The idea of starting a venture began to buzz insistently in my mind in 2011. I did not really know what problem I would have tackled yet, but I was sure I would have found a difficult and exciting one along the way. At that time, I was still a PhD student at EPFL, and Andrea Biasiucci was doing his PhD in the lab next to mine. I started discussing the possibility to launch a project together during the winter of 2011.  I knew we had very strong complementary skills, I felt we could be a great match as cofounder, and it was clear to me that we both wanted to spend our time tackling a problem that could impact people lives.

I remember we were on the bus going home, when I „proposed to him“ to start our venture. After an initial laugh about the idea, he almost immediately reconsidered it, and replied, „yes, let’s do it!“. Our (ad)venture was born then, by our strong will to change the world with our knowledge and skills. Finding the right problem to tackle took many months, during which we met regularly once or twice a week with the goal of finding a meaningful problem to solve. We spent many hours after work reading, thinking, discussing ideas, and building strange prototypes that could solve what at the time we tought were the interesting problems to solve.

Then, in summer 2012 we came in contact with something that was really exciting. Andrea (Biasiucci) was involved at that time in a research project with a rehabilitation center. During one of the sessions, he met a very skilled therapist, expert in electrical stimulation, that showed him what could be done with electrical stimulation. After some laborious electrodes montage, the therapist was able to stimulate at the same time different muscles to produce actions such as drinking from a cup and passing objects around! Andrea that night came back very excited by what he saw. After few weeks of discussions and literature search, it started to become clear that this could have been translated into easy-to-use, effective technology with the potential to help millions of people.

What is Intento about? What problem do you solve?
Intento is trying to help the most severely disabled stroke patients, who currently lack effective rehabilitation solutions. Our technology allows them to reenter therapy since early stages after stroke, even if completely paralyzed, and perform exercises with their paralyzed extremity. Our first product, a professional solution for rehabilitation for hospitals and clinics, allows patient to perform again complex movements involving arm and hand.

How many member are in your team?
We are currently 3 people in the team, although we have several collaborations in place with EPFL, clinicians at the University Hospital of Lausanne, and industrial and fashion designers.

You are part of  some programs. Lets talk about them. First, the Venture Kick program. You just recently won the first stage. How was it?
Venture Kick offers a great support for early stage startups like us. Winning the first stage was great! We really got the impression that joining this community of entrepreneurs will provide us with what we need the most: experience from people that tried and succeeded before us.

Beside of the money, how does the program help you?
We think that the most important thing that the program does, at least at the first stage, is to really help you to think to what are the most important next steps for your business case. We are looking forward to the first Kicker’s camp, where I guess all our assumptions will be X-rayed and we will get a big help to understand on what we need to focus. Furthermore, we believe that the network of Venture Kick and visibility provided by the program will be very helpful for making our case more solid and close a succesfull first round.

You are also part of the Startup Acceleration workshops at EPFL by venturelab. How is that? Are there any speakers who impressed you? Are you looking forward to see one of them?
I took only the first two classes at EPFL for the moment, and it turned out to be a very useful, hands-on course. I think that people in early stages as us can really benefit a lot from this. It provides a very interactive way of learning, and at the same time allows you to better understand the critical factors for the success of a startup.

What would you recommend other entrepreneurs, if they ask you about venture Kick or venturelab?
venturelab built a very strong environment to support you! Use it and benefit the most you can from it! For this to happen, don’t forget to „do your homework“,  and never stop working on your project and idea. That’s the best way to get the maximum out of the program and the people involved.

What are your next steps?
In the next months, we will complete the product development, the first clinical study on stroke patients, now running at CHUV, and close our first round of investment.

Have you talked to investors?
Yes, we have. Clearly, you need to bring quite solid evidence on the table to convince people to put money on your initiative, given its inherent risk. Having the first results out of the clinical study will surely help in this regard.