According to the Global-Innovation-Index, Switzerland stays the most innovative country – for many years in a row now. The ones who were part of the TOP 100 Swiss Startup Award 2017 now know why. For the seventh year 100 experts have chosen the most promising startups with the highest growth potential. With their innovative approaches, the startups not only amaze their customers, but also industry experts. The TOP 100 has become a label of recognition for the selected startups.

100 selected experts nominated the most promising startups for the award. There are only two criteria: the potential for success and the year of foundation – startups younger than 5 years. The expert jury consists of experienced business angels and venture capital investors, who have the eye to assess the international potential of startups. The figures show that this has proved successful for years. The interest is growing steadily and brings millions of investments to the companies. The best Swiss startups are accompanied by the IFJ Institut für Jungunternehmen.

Sparking atmosphere
The NZZ offset hall in Schlieren is filled to the last place, the mood as electrically charged. It is THE event in the Swiss startup scene and brings together interested persons and the media from all corners. Stefan Steiner, Managing Director venturelab German-speaking Switzerland, opens the ceremony and welcomes the audience with a short speech. Key Note Speaker Ariel Lüdi talks about the success of his company and what awards mean to him. Subsequently, the winner of the Public Voting Home. Global Global (PapayaPods) is awarded, before the newcomer startups give great performances in the one-minute pitches. It continues with a panel discussion about „Swiss Growth Capital Funds“. Jean-Philippe Tripet (Aravis Growth / Swiss Entrepreneurs Fund), Sunnie Groeneveld (Vice President Zukunfsfonds Switzerland) and Eric Gisiger (Helvetica Capital) provide exciting insights and important inputs. And finally – the Grande Finale: The ranking is shown publicly for the first time. Of course, they started with rank No.10 as the tension is up to reach its climax and then, finally, there is the moment everyone has been waiting for:

And the Winner is … 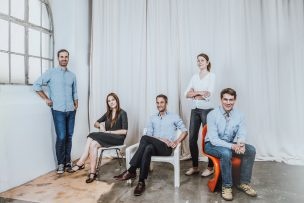 Ava! The bracelet of the Zurich startup shows the fertile days in the female cycle – with a quite high accuracy. Using millions of data points, an algorithm calculates 89% or 5.3 of the average 6 fertile days of a woman. This is twice as much as the best results of their competitors. The more regular and longer the bracelet is worn at night, the more precise the output.

The complete TOP 100 at startup.ch
On startup.ch, all TOP 100 companies are presented in detail. The „Startup.ch Magazine 2017“ as a special edition of the Handelszeitung and the PME Magazine is also available for download.