CarPostal is heading into an innovative future and signed a deal with the EPFL spin-off BestMile for a pilot project with autonomous shuttles in Sion. We talked with Thierry Golliard, Head of Open Innovation at Swiss Post, about the project. 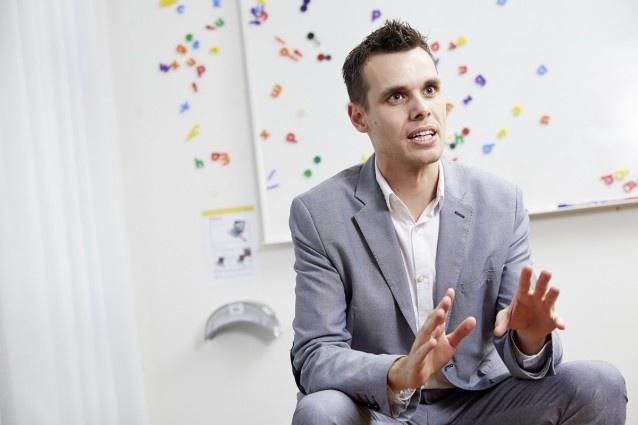 Taking advantage of the academic support of world experts in mobility, BestMile is recognized as a major player in the mobility revolution. The startup has been placed on the 29th position of theTOP100 ranking and showcased its technology in the U.S. with the venture leaders USA program. It offers a solution to control fleets of autonomous vehicles in the same way a control tower does in an airport. Lately the company announced some big news:  BestMile signs up with its first customer and formalizes its partnership with CarPostal, which is leading the sector of public transportation in Switzerland. 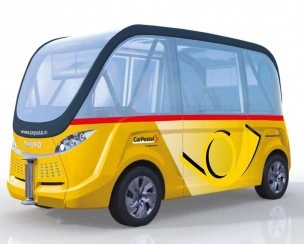 For the first time in Switzerland, locals and visitors to the city of Sion, Valais, will experience for a two year period this new means of public transport: autonomous shuttles. These smart vehicles have capacity for 9 passengers and will operating on public roads since the spring of 2016. Ultimately, the goal of CarPostal is to complete its offer regarding public transportation, especially in remote areas.

Therefore we wanted to know more about Swiss Post and their ways and method to push innovation. In July we already published an interview with Roland Keller, project manager of PostVenture, about innovation within Swiss Post. Recently we met Thierry Golliard, Head of Open Innovation at Swiss Post, and talked with him about autonomous shuttles, drones and future plans for the corporation.

Thierry, why is the Swiss Post interested in autonomous driving?
We believe autonomous driving can extend our mobility offer and bring new business opportunities. In line with the principle «learning by doing», the project in Sion will show whether these intelligent vehicles can provide new kinds of mobility in regions that cannot currently be serviced by public transport and whether the use of autonomous shuttles in public areas gives customers added value. 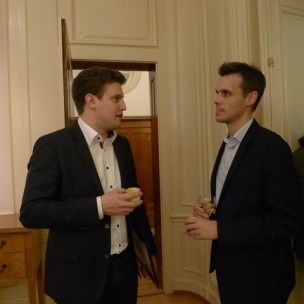 Thierry Golliard (r) and BestMile-CEO Raphael Gindrat are chatting during the venture leaders gala-night at the US embassy in Bern.

Who is involved in this pilot project?
Swiss Post is in contact with various partners regarding this project. The city of Sion offers the “playground”. The two vehicles are developed by Navya, a company based in France. A program created by the start-up BestMile monitors and controls the two autonomous vehicles. And finally the ETH Lausanne (EPFL) will be working on integrating a fleet of autonomous shuttles into the local public transport system. This project is a fine example of open innovation.

The pilot with CarPostal and the autonomous shuttle will be in Sion. Why Sion?
Because the city of Sion – besides the Canton of Valais, the EPFL, the University of Applied Sciences and Arts Western Switzerland (HES-SO) Valais-Wallis and Swiss Post – is a founding partner of the Mobility Lab Sion Valais, where we all together are pooling our expertise in order to create, develop and test innovative mobility solutions.

You tested delivery by drones, now driverless busses, what’s next?
There are definitely more innovative projects in der pipeline. Mobility and logistics are two of the main challenges in smart cities of tomorrow and at the same time two core competences of Swiss Post. Together with partners, we want to be influential in shaping the mobility and logistics of the future. Therefore you can soon expect innovative projects in the fields of, for instance, city logistics, mobility platforms, mobility pricing or assisted living.

You were at the venture leaders gala-night at U.S. Embassy in Bern on November 5. What was your greatest take away from this evening?
I felt a lot of confidence in the room. Without any inhibitions vis-à-vis peers of other bigger countries, the Swiss startups are keen on changing the world, which is awesome!

BestMile-CEO Raphael Gindrat was part of the venture leaders journey to the US this year. Here is an introduction video with him:

BestMile adds $2M to a Seed Round