On a regular basis the ETH Entrepreneur Club provides us exciting blogs about the Startup Essentials (#vlabSE). The second edition of this semester’s workshops by venturelab started with a take on what makes the ideal mindset of an entrepreneur and his team. Guest speaker was Viktor Calabrò, CEO of Staff Finder, who recently closed a funding round led by One Peak Partners and Goldman Sachs Private Capital. 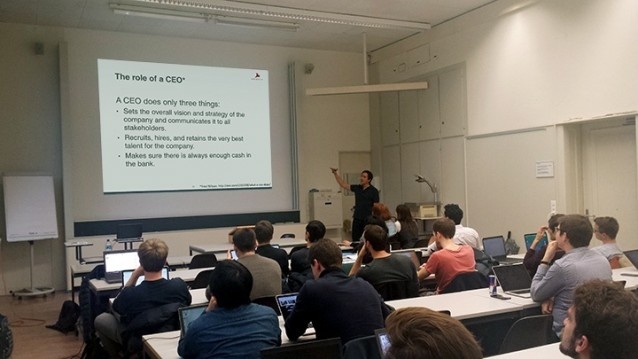 Lead speaker Stefan Steiner emphasised that entrepreneurs must above all be prepared to face ups and downs. They must therefore be strongly passionate about their idea, seeing as the long working hours and high risk-taking involved in entrepreneurship is additionally demanding.

This is an attitude that must be shared by potential team members as well, as they are then better able to motivate you in hard times. Also, if your team genuinely believes in your idea, they are less likely to demand a market salary (which is more than what you can give them in the beginning!) and will instead ask for shares of the company.

Stefan furthermore recommended to hire only highly talented people in the beginning, as „A brings A, but B brings C“, implying that talented employees will only bring in people that are on the same level as they are. He added that the competence of the team has become known to be the „K.O. criteria“ of investors, with 95% of investors putting the most importance on this. 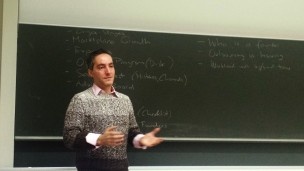 Viktor Calabrò, CEO & founder of Staff Finder – with whom we talked last year about his company and who closed a huge financing round a few weeks ago – picked up on the subject by answering to a round of questions from the audience. Amongst the tips he gave, he particularly recommended to write a sound founders agreement, only hire people than can do something a lot better than you can, vest the shares you give to new hires and speak to your customers very early.

He also built up on Stefan’s views by basing his choice to only include investors in his advisory board on his belief that someone who believes in his company is bound to give better advice than someone with only has a title to give.

The workshop ended with participants giving presentations on how their starting team is structured, followed by feedback from Stefan and Viktor.

The Startup Essentials are a great format for young and ambitious entrepreneurs. Loads of success have already participants from the last semester course like Clara Beck from TapTools, Tauras Sinkevicius from WedMap or Raphael Gindrat from BestMile. Register here for the next free workshop with Andreas Jurgeit who works at the Paul Sherrer Institut in the Sartup Creation Department. You want to jump into the next workshop session? A report by ETH Entrepreneur Club (written by Jack Gasser).

Startup Essentials Workshop #1: The story of your startup